A CONVERSATION WITH MARIA GALLART 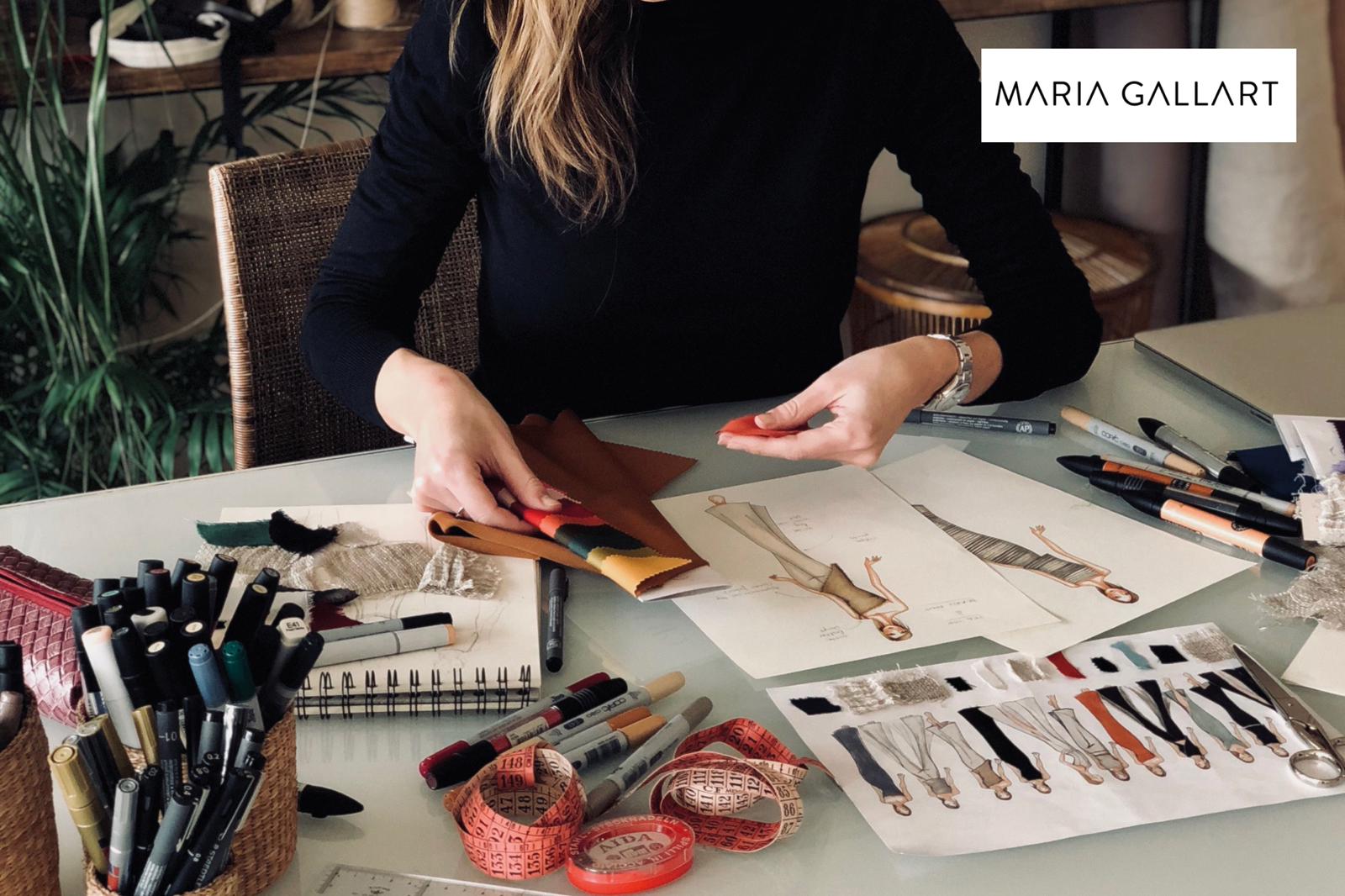 I was lucky enough to be able to interview Maria Gallart.

We got in touch and we agreed to make their tent the meeting point. When we met she greeted me with a huge smile and without realizing it I felt very well received. We thought that going to a coffee shop could be a great place to hold the meeting. The truth is that I had prepared some questions with some pretty clear ideas, but, when we started, Maria conveyed to me so closeness and confidence that I proposed to put a recorder on and just hold a talk. It was an amazing and very accurate idea because we both forgot it was an interview and focused on sharing information from our thoughts and discussed about our shared passion.
While talking to her, I drew a multitude of new ideas and knowledge. I learned a lot from Maria and felt a little more inside the sector.
Next I will tell you about her thoughts and opinions, her history and her signature.

Maria Gallart is a young entrepreneur. In 2017 she founded a brand under her own name MARIA GALLART. She studied fashion for 5 years at LCI University. She made a project which won the award for the best collection and the second best of the course. This gave her hope and motivation to move forward within the sector. In her student days, she designed a collection of satin and crepe dresses that combined them with macramé and strings. The collection had very rustic airs. A few years later she did a postgraduate degree in marketing and fashion at LCI.

Maria did internships in Basic Code just finish the race. At the company, she designed “casual” clothes. She did six months of internships and she was hired to work. But after a fixed year and a half, of her own free will, she decided to quit her job because it just didn’t fit her style. She points out that in Basic Code she learned a lot but she wanted and needed something else. After her first job, she worked in Pronovias, but after three years there, she decided to leave the post because she found herself strong enough to create something independently. She was young, felt secure and had experienced enough to start something different and more personal. She wanted to make her personal product a more commercial one. Something different but at the same time wearable.
Since its inception in the sector, Maria has had very clear ideas and tastes, which she always applied. Her personality always breathes.

As she started with her own brand she took on a very reflected idea with her way of being.
Since its inception it has caught its attention and applied rustic style and linen. Italian fashion has always been one of her greatest inspirations. She wanted to create with all the ideas that inspired her. The long dresses, party clothes, shirts and tops were the garments she enjoyed most designing and for which she felt most motivated. In the end she got a mark that represented with total sincerity and clarity her personality and her tastes.

MARIA GALLART started with a spring/summer collection.
It was a small line to experiment and analyze the market at the time. Once the project was taken outside she realized what she liked the most and what she didn’t like that much.
After her first collection she took out another winter collection. She realized that her brand was operating better and she was getting more recognition. She began to promote and sell her collections online. Many clients wanted to try on the clothes so she decided to set up a showroom on a flat. However, finally, she end up taking the decision to open a physical store in Barcelona. Maria thinks the online world is an opportunity and the future, but online brands need a lot of publicity so they don’t get stuck.
For its type of product it was necessary and more favorable that there was a physical space. She believes that having a physical store is important. The MARIA GALLART store is currently located at “Rector Ubach, 51, Barcelona”.

“The fashion industry is complicated but I’m happy to be a part of it.”

The hardest thing when it comes to undertaking is first to assess whether what you’re going to do will please and whether the market will accept it. Entrepreneurship is the whole process itself. Suppliers, fabrics, patronist… It is difficult to find good professionals within this sector. Small brands with little production are more expensive because there are fewer and it costs more to pull them forward. The price it id adjusted even if it doesn’t seem like. Many people have gone to countries like China or India to make up. Maria produces everything in Barcelona. All fabrics such as satin or crepe are purchased in Spain but some more special ones such as linen are Italian.

She started alone with MARIA GALLART. Then she count with the help of some professionals and when the brand and the amount of work began to grow her mother joined to help her. She’s her right hand. The firm consists of a small team.

Her designs are characterized by being women’s garments that seek to take out the sexy side and dress the clients for special moments. In her collections, is always highlighted the colors and different textures of the fabrics. MARIA GALLART’s garments define the designer herself in both her style and her personality.

“With passion and desire you can go forward.”

Mary and I share a very similar opinion. Speaking and exchanging thoughts on how we saw the fashion, we got to the conclusion that in a city as cosmopolitan, open, evolved and alternative as Barcelona, specifically with fashion, we dare not take any chances at all. We are afraid to stand out from the crowd and few people dare to take the step out of the typical “uniforms” that all citizens wear .We feel self-conscious about what they thought or afraid that some might looked at us as we walk the streets for wearing a different combination than usual, a more striking print or a more recharged or not-so-common accessory. Fashion in a city like Barcelona could evolve much more than it is going on right now. We dare not take the step but the city has every chance to do it.

I learned a lot from Maria and the firm and it was a privilege to see fashion from the point of view of a professional. A close, sincere and transparent professional.

Thank you Maria, it was a pleasure.

Atelier by Mery B

Made in Barcelona, ​​is a registered trademark